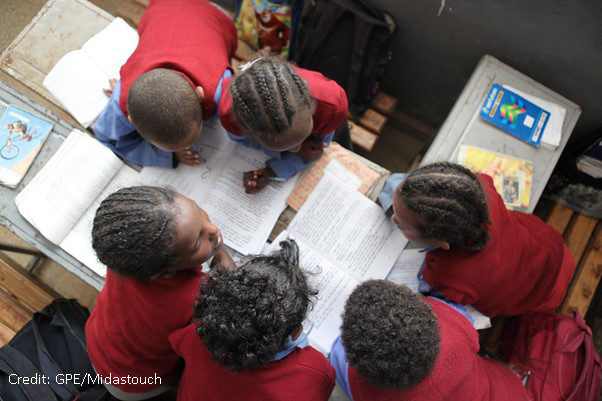 The COVID-19 pandemic continues to pose challenges for the provision of education for children around the world. Learning during the prolonged school closures has been particularly challenging for children with disabilities. Findings from preliminary analysis of data collected from 100 school-based personnel and 57 parents of children with disabilities in various regions in Ethiopia during the pandemic show:

Keeping these factors in mind, significant concerns are being raised in relation to the impact of school closures on children’s learning and emotional wellbeing.

We collected data from over 7,500 children in Ethiopia who returned to school after more than 7 months of school closures. Half of these children were enrolled in Grade 1 and the remaining in Grade 4. We selected the same schools that participated in the RISE Ethiopia project in 2018[i], when we also collected data from different cohorts of children in Grades 1 and 4. Through a household survey, we asked the main caregiver of each of these children to complete the Child Functioning Module of the Washington Group on Disability Statistics. This enabled us to capture information about the prevalence of difficulties in functioning among Grade 1 and Grade 4 children, and link this to achievement in numeracy in 2018-19 (prior to the pandemic) and in 2020-21, after children had returned to schools and completed 45 days catch-up classes (which aimed to cover aspects of the curriculum that had been missed during school closures).

Questions on disability developed by the Washington Group represent the most recent thinking around disability and draw support from the United Nations Conventions on the Rights of Persons with Disabilities (UNCRPD). In this approach, disability is conceptualised as a bio-psycho-social model of human functioning. Herein, disability is understood as the interaction between a child’s impairments and the attitudinal and environmental barriers that hinder their full and effective participation in society. Moving from traditional questions focusing on presence or absence of a disability, the Washington Group questions are intended to be simple to administer and do not raise concerns of stigmatisation as they do not require respondents to label themselves or others as disabled. They do not give a categorical diagnosis of difficulty, rather the questions are designed to identify a population which, due to functioning in core domains, is at risk of restricted participation in a non-accommodating environment. Analysis of data allows for the generation of multiple disability identifiers (levels of mild, moderate or severe difficulty based on four response option) that reflect the continuum of disability.

Focusing on the 13 areas of functioning, and particularly on the incidence of moderate to severe difficulties, we found that caregivers reported a higher incidence of moderate to severe difficulties during the academic year 2020-21 (after the schools were reopened) for concentrating, accepting change, making friends and walking (see Figure 1). There was lower incidence for hearing, anxiety and depression, with no change for other areas. While no neat patterns emerge here, what is noteworthy is the reporting of higher difficulties in socio-emotional aspects, such as accepting change and making friends, which could be linked with disruption in routines and also the prolonged isolation from peer groups. Additionally, increased reported difficulties in concentration are also likely to emerge, given that children with disabilities were more likely to be have lower cognitive stimulation due to the lack of accessible resources at home. 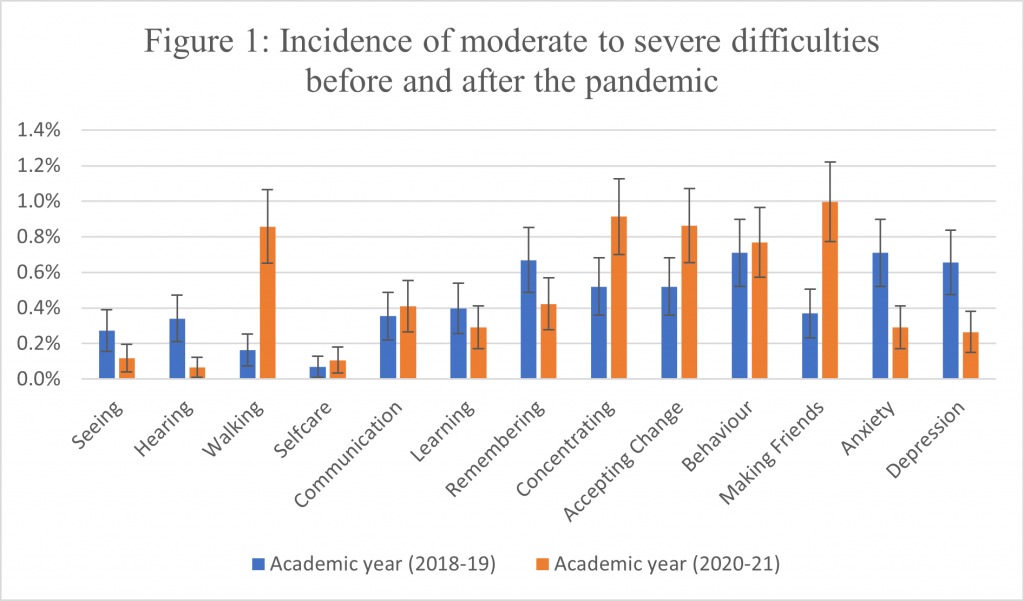 The same numeracy tests[i] were administered to different cohorts of Grade 1 and Grade 4 children in 2018-19 and 2020-21. There were no particular adaptations made on the test items for children who reported moderate to severe difficulties as these were unknown to the enumerators at the time of data collection. Because there is direct comparison between these two tests within grade, we present here the percent of correct responses achieved by children depending on their degree of functional difficulties. 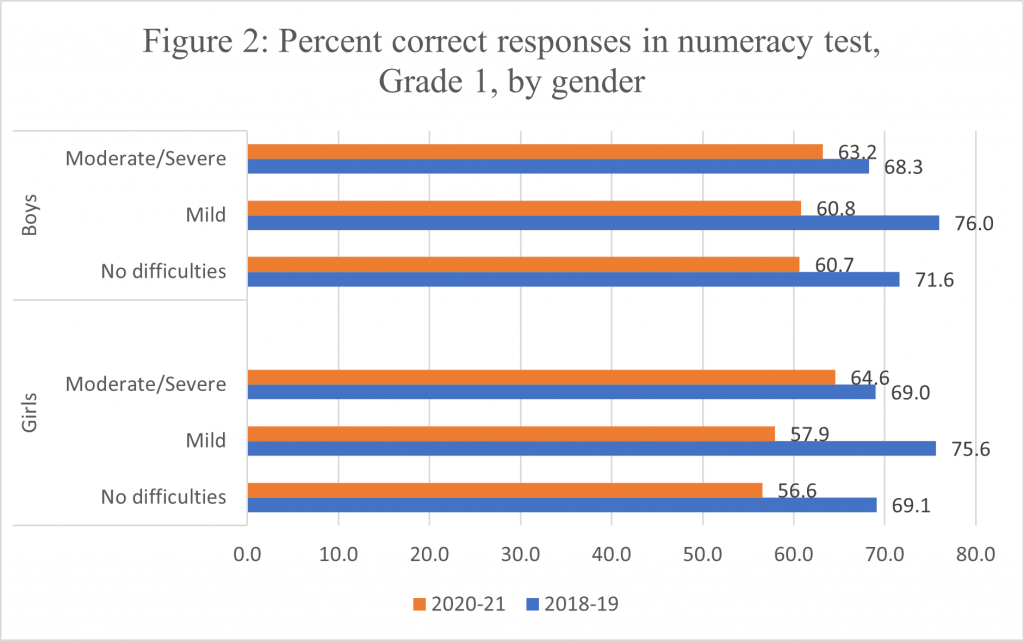 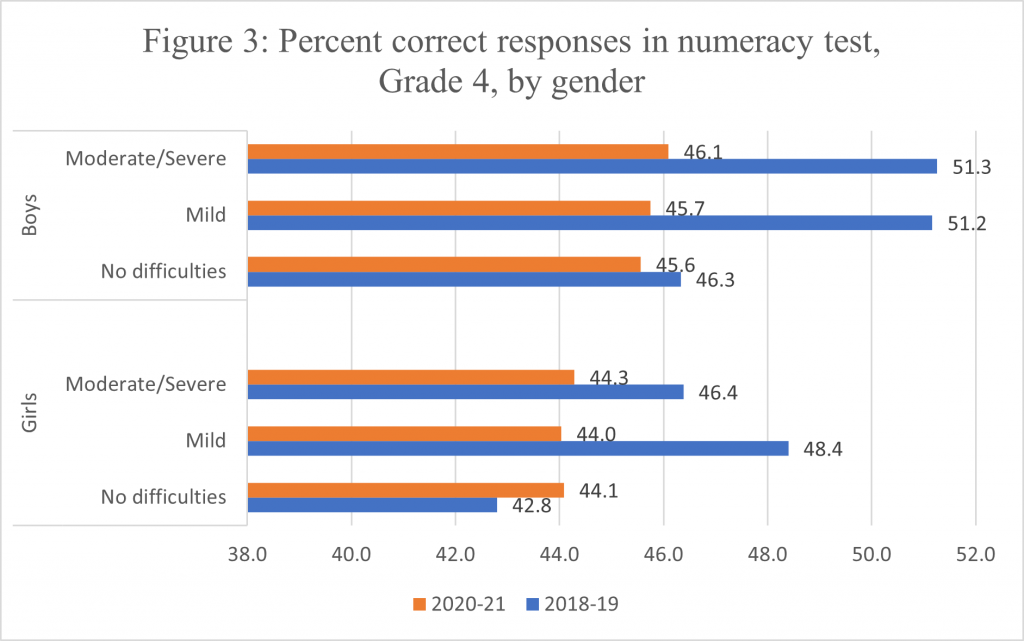 Considerations for continuing support for children with disabilities

Although there has been a significant expansion in access to primary education in Ethiopia over the past couple of decades, children with disabilities continue to face many disadvantages. Since 2018, under the GEQIP-E reform efforts, increased attention has been given to include children with disabilities. However, the pandemic has raised many additional concerns and highlighted the urgency for more concentrated efforts.

Our findings indicate that, after school reopening, there is an increase in the reported prevalence of functional difficulties among Grade 1 and Grade 4 children. Additionally, there is a relatively higher learning loss experienced by those children who have mild, and moderate to severe difficulties. After schools reopened, the average numeracy achievement of Grades 1 and 4 children with disabilities was significantly lower compared to children from the same grade levels prior to the pandemic. This issue is of particular concern if we acknowledge that these declines in numeracy achievement levels are for children who were in school both in 2018-19 and 2020-21. Clearly, children with disabilities who were not enrolled in school are not included in the present analysis, for whom we are unable to establish the degrees of functional difficulties they face or estimate any potential challenges with learning, particularly during the pandemic.

As we move forward with the hope of returning to regular school routines, there is a need to acknowledge that children with disabilities, like all children, will need targeted support in re-engaging with learning, which may be different across regions. Additionally, they will need support to settle back into school routines and deal with the significant impact on their socio-emotional wellbeing. This requires schools, regional and national governments to assess their contextual realities and respond to these in ways which are most effective. Most importantly, there is a pressing need to reconfigure the important role of schooling, which centrally values both academic learning and student wellbeing.

We are grateful to the Bill and Melinda Gates Foundation and the Research for Improving Systems of Education (RISE) programme for funding the research presented in this blog. Funding for research related to the experiences of children with disabilities during the pandemic was provided by the Qatar Foundation and undertaken under the aegis of CaNDER.

[i] Schools in Tigray and some schools in Benishangul-Gumuz were excluded due to security reasons. 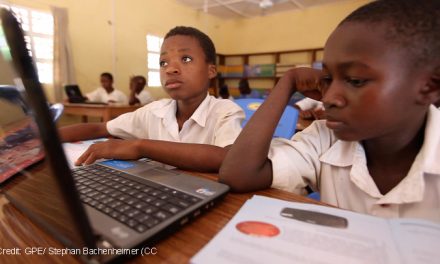 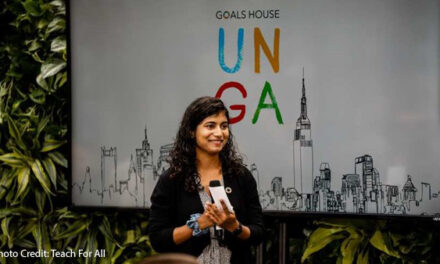 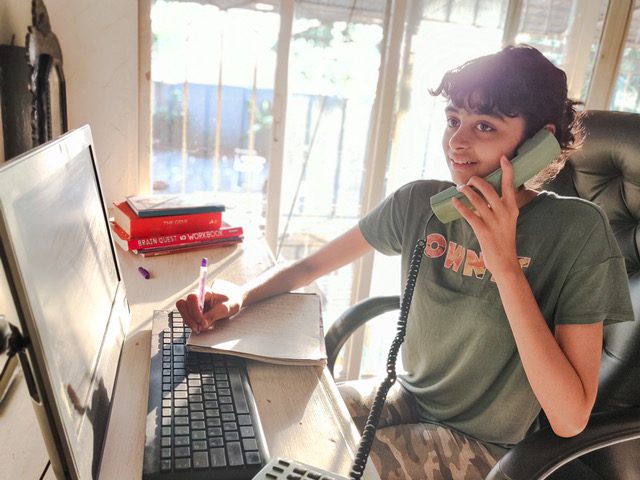 Learning through the coronavirus lockdown: listening to children’s experience in India 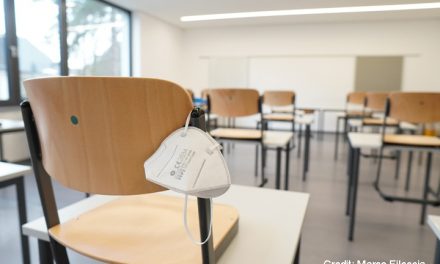