You are here: Home › Forum › News and Events › Voices of the Next Generation – Insights from the Early Career Conference 14 June 2018
By UKFIET on July 3, 2018 in News and Events 0

Earlier this month, I was lucky enough to get the chance to join this year’s Early Career Conference on education in international development. I would like to share some of my experiences from the day, for those who were not able to attend, but also for those who were present, and who took part in alternate sessions for the three timeslots where we were divided into groups.

The day started off with a ‘Marketplace’ networking session, with 13 organisations represented, including donors, research institutes, forums, consultancies, and not-for-profit ventures, all with a focus on international education. The 45 minutes allowed for this networking opportunity went by very quickly, and with so many people with shared interests present, the room was quickly full of the sounds of introductions being made, booklets swapped, and eager discussions. Attached is a photo of some of the reading I picked up during this session: 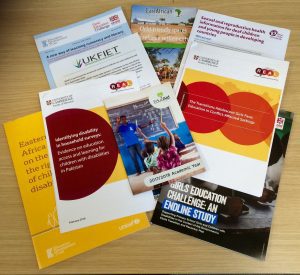 For the rest of the day, there were a series of talks and panel discussions. One which I would like to share from the Thematic Table Discussions is:

Nidhi Singal has 10-plus years of experience in the field of addressing education inequality among marginalised groups in the global South. In this session, Nidhi introduced some of the key concepts in education and disability, including the medical, social and bio-social-psycho models of disability. She also reflected on how the discourse around disability has changed over the past decade, and how our conceptions have evolved along with the language we use. Nidhi emphasised that disability, and understandings of disability are not homogenous. We often (wrongly) assume that there is a universal understanding of disability, and transfer this to local contexts without finding out how people in those places perceive disability.

While discussing the difficulty of defining disability, and particularly attempts to quantify the prevalence of disability, Nidhi noted the importance of the Washington Group Surveys. These four question sets were formulated to be used in censuses and surveys, and focus on functioning in basic actions, such as seeing, communicating, and self-care. The questions are designed to identify individuals at increased risk of experiencing barriers to education, employment or other forms of social participation, and to provide comparable data across populations, regardless of nationality, economic resources, or culture.

Despite the growing body of data on disability prevalence, Nidhi noted that not enough of this research links disability to learning or school access.

Nidhi then initiated a discussion on commonly held misconceptions and myths surrounding disability, using examples from India and interrogating our own views.

Myth 1: Children with disabilities are not in school

Myth 2: Children with disabilities are not expected to go to school

Myth 3: A lack of resources makes it hard or impossible to make schools accessible for children with disabilities

Myth 4: Teachers do not want students with disabilities in their classrooms.

Some take-home points from this talk:

For more information, please visit the REAL centre website at the University of Cambridge or twitter accounts: @REAL_Centre or @nsingal14

I would like to thank all the other speakers and participants who made the day so engaging and inspiring.