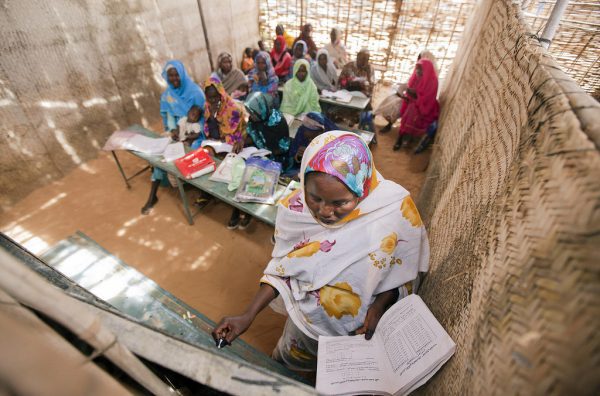 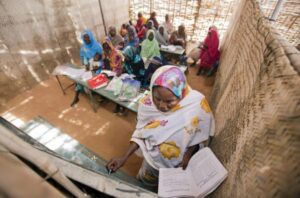 A view inside Abu Shouk Internally Displaced Persons (IDP) Camp’s Women Center, in North Darfur, Sudan, where classes are offered in Arabic, the Koran and Mathematics. Approximately 80 women attend the classes, usually taking their children along with them. UN Photo/Albert Gonzalez Farran.

There’s been much buzz in the global education world of late, with recent events being billed as a kind of ‘final sprint to 2015’.

Last week was the high-level Learning for All Ministerial Meeting, focused on accelerating progress among eight developing countries that are home to nearly half the world’s 61 million out-of-school children. Linked to this was a series of panels hosted by the Centre for Universal Education at Brookings exploring financing and quality gaps in achieving education for all. In addition, the Global Campaign for Education’s annual Global Action Week has just drawn to a close, highlighting the gap of 1.7 million teachers worldwide.  These happenings followed closely on the heels of the Post-2015 Global Thematic Consultation on Education, which culminated in Dakar last month.

It is well known that the current set of education goals – both Millennium Development Goal (MDG)- and Education For All (EFA)-related – is unlikely to be met, most substantively through analysis via the annual EFA Global Monitoring Reports. With unfinished business in mind, discussion in Dakar coalesced on the need to prioritise equity, improve quality learning and expand access beyond primary. A number of proposals for the post-2015 education goals have already been formulated along these lines, with more versions surely to come.

All well and good, except for the fact that it does feel a bit déjà vu. Both the Jomtiem World Declaration on Education For All in 1990 and the Dakar EFA Framework for Action in 2000 included goals of a similar ilk, albeit in slightly different form. Perhaps the third time’s the charm, but this is by no means guaranteed.  As important as it is to get any new formulation of goals right, a closer look at how we get there can’t come too soon.

Take a stronger multidimensional approach. People describe their own experience of poverty as multidimensional, and it should be no surprise that some of the biggest barriers to education fall outside of the traditional realm of the sector. Household income, infrastructure, health care and food security all play a significant role, and analysis such as that by the Chronic Poverty Research Centre shows that solutions need to be better joined up.  Moreover, education clearly contributes to gains in other goal areas. These path dependencies and multiplier effects deserve greater attention.

Increase the focus on financing, particularly domestic. The much-discussed external financing gap in achieving universal basic education has been pegged at an annual $26 billion, despite the fact that education, along with health, has been a major beneficiary of the MDG era. While prospects for donor aid to education seem to be decreasing, it is important to note that touting this gap itself does little to reveal the politics behind the numbers. Aid to education still has a role, particularly in the poorest countries, but a greater emphasis is surely needed on national sources of finance.

Keep international goals in perspective. While the MDGs and EFA have had their place, they can’t be counted on to drive change in the education sector nationally. Analysis of the impact of the MDGs has generally found that, while there seems to have been a link to increased and better aid, causality in improved development outcomes is more difficult to demonstrate. A quick look across three recent case studies conducted by ODI’s Development Progress project – Ethiopia, Benin and Cambodia – reinforces this view for the education sector: international goals have provided a shared framework for sector planning, they themselves have not been fundamental drivers of change.

Lose the angst.  Finally, and admittedly more subjectively, in every global education meeting I’ve recently attended concern has been raised that not enough attention is being given to the sector. A decreased proportion of aid has perhaps played into this feeling, but less aid does not equate to education’s reduced importance. Much more needs to be made of the demand side – in citizen surveys such as MyWorld, education comes out as a top priority – which, alongside a plethora of other evidence, should mean that the value of education can be confidently taken as a given.

As the world’s third set of education goals emerges for post-2015, education actors would do well to move quickly from the ‘what’ onto broader elements of ‘how’ any new goals can be achieved. If not, before we know it we’ll be back in the same place for a fourth time – and there’s no charm in that.