The Myth of Teacher Shortage in India 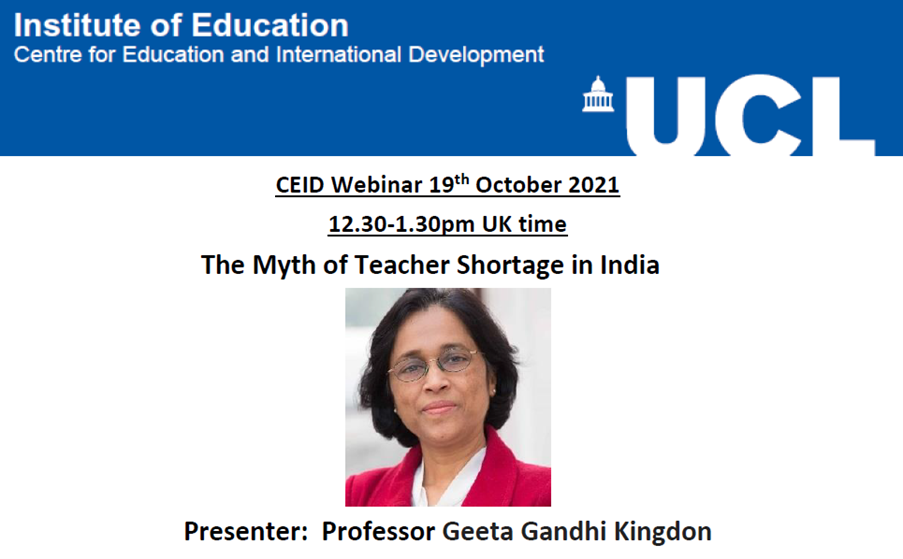 This paper examines the widespread perception in India that the country has an acute teacher shortage of about one million teachers in public elementary schools, a view repeated in India’s National Education Policy 2020. Using official DISE data, we show that there is hardly any net teacher deficit in the country since there is roughly the same number of surplus teachers as the number of teacher vacancies. Secondly, we show that measuring teacher requirements after removing the estimated fake students from enrolment data greatly reduces the required number of teachers and increases the number of surplus teachers, yielding an estimated net surplus of about 342,000 teachers. Thirdly, we show that if we both remove fake enrolment and also make a suggested hypothetical change to the teacher allocation rule to adjust for the phenomenon of emptying public schools (which has slashed the national median size of public schools to a mere 64 students, and rendered many schools ‘tiny’), the estimated net teacher surplus is about 764,000 teachers. Fourthly, we highlight that if government does fresh recruitment to fill the supposed nearly one-million vacancies as promised in the National Education Policy 2020, the already modest national mean pupil teacher-ratio of 22.8 would fall to 15.9, at a permanent fiscal cost of nearly Rupees 480 billion (USD 6.6 billion) per year in 2017-18 prices, which is higher than the individual GDPs of 56 countries in that year. The paper highlights the major economic efficiencies that can result from an evidence-based approach to teacher recruitment and deployment policies.

Geeta Gandhi Kingdon is Professor (part time) at the UCL Institute of Education, where she holds the Chair of Education and International Development.  Her research interests are in economics of education in developing countries, particularly in South Asia and Africa. She has investigated school effectiveness, gender in education, labour market outcomes of education, and the political economy of education. Apart from publishing research and opinion editorials, and serving on the editorial boards of academic journals, she advises governments and donor agencies on education related matters.  In 2013, Professor Kingdon was awarded an Honorary Doctorate by Kingston University London for “her outstanding contributions to education and development”. Professor Kingdon also works as President of a non-profit registered society school in India.