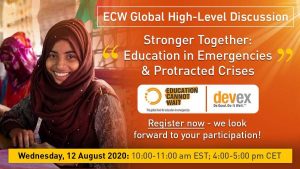 75 million school-aged children and youth are in desperate need of educational support, either in danger of, or already missing out on their education. Communities highlight the importance of education during times of crises, yet education appeals receive less than 2% of humanitarian funding. The right to education is most at risk during emergencies but it is also the exact time when it is needed the most. 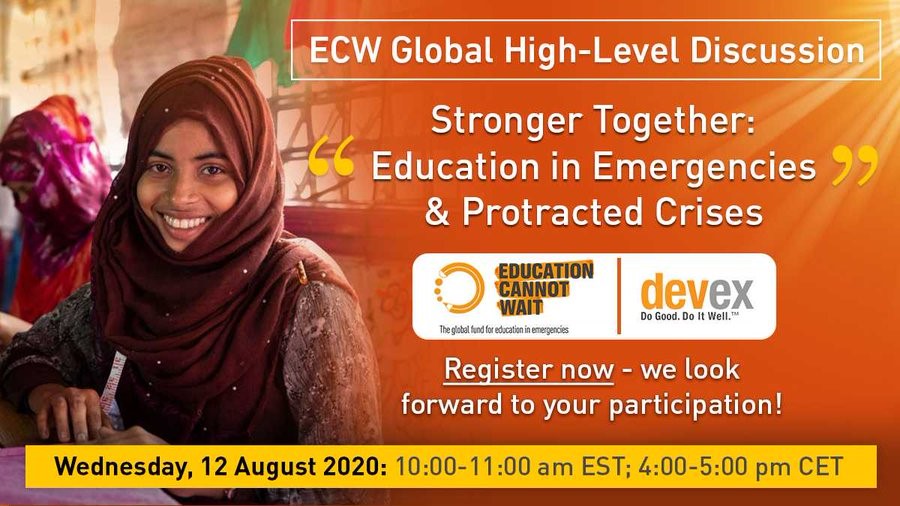 On August 12, 2020, Devex and Education Cannot Wait are hosting a dynamic online event to engage key stakeholders and generate a global conversation showcasing challenges and solutions to deliver a more collaborative and rapid response to the educational needs of children and youth affected by crises, especially.

The event will also include the official launch of Education Cannot Wait’s annual report, highlighting important results and lessons learned on how to advance education for the most vulnerable. Together with key experts and high-level stakeholders, we’ll shine a light on the important link between education and peace and development, and showcase solutions to boost access to education for children and adolescents living in crisis-affected countries.
Register here

We invite you to share your questions with us in advance to events@devex.com — or submit them to the host during the event using the live Q&A chat box.

Raj Kumar is the Founding President and Editor-in-Chief at Devex, the media platform for the global development community. He is a media leader and former humanitarian council chair for the World Economic Forum and a member of the Council on Foreign Relations. His work has led him to more than 50 countries, where he has had the honor to meet many of the aid workers and development professionals who make up the Devex community. He is the author of the book “The Business of Changing the World,” a go-to primer on the ideas, people, and technology disrupting the aid industry.

Gordon Brown served as Prime Minister of the United Kingdom from 2007 to 2010 and is widely credited with preventing a second Great Depression through his stewardship of the 2009 London G20 summit. He was one of the first leaders during the global crisis to initiate calls for global financial action, while introducing a range of rescue measures in the UK. In April 2009, he hosted the G20 Summit in London where world leaders committed to make an additional $1.1 trillion available to help the world economy through the crisis and restore credit, growth and jobs. They also pledged to strengthen financial supervision and regulation. In addition to his global education work Gordon is a Senior Panel Member at the Kofi Annan Foundation initiative on Electoral Integrity and is a Patron of the Burma Campaign UK. He is also an Honorary Fellow of the Royal Society of Edinburgh and a Patron of the Parliamentary Outreach Trust.

Jan Egeland has been the Secretary General of the Norwegian Refugee Council since August 2013, a role which oversees the work of the humanitarian organisation in more than 30 countries affected by conflict and disaster. In 2015 he was appointed in a second role by former UN Secretary General, Ban Ki-moon, as Special Adviser to the UN Special Envoy for Syria. Within this position he chaired the humanitarian task force responsible for the safety and protection of Syrian civilians. He stepped down from this role on 1 December 2018. In 2006, Time magazine named Jan Egeland one of the “100 people who shape our world.”

Henrietta H. Fore became UNICEF’s seventh Executive Director on 1 January 2018. She has worked to champion economic development, education, health, humanitarian assistance and disaster relief in a public service, private sector and non-profit leadership career that spans more than four decades. From 2007 to 2009, Ms. Fore served as the Administrator of the U.S. Agency for International Development (USAID) and Director of United States Foreign Assistance. The first woman to serve in these roles, she was responsible for managing $39.5 billion of U.S. foreign assistance annually, including support to peoples and countries recovering from disaster and building their futures economically, politically and socially.

Nujeen Mustafa is an incredible young woman who, at just sixteen, made the 3,500-mile journey from Syria to Germany in a steel wheelchair. Nujeen was born with cerebral palsy and spent the majority of her life confined to her apartment in Aleppo, Syria, where she taught herself English watching shows on TV. As war broke out, she and her family were forced to flee, first to her native Kobane, then Turkey. Her family didn’t have enough money for them all to make it to safety in Germany, where her brother lives, so her parents stayed in Turkey while she set out with her sister across the Mediterranean, braving inconceivable odds for the chance to have a normal life and an education. Nujeen’s optimism and defiance when confronting all of her challenges have propelled this young refugee from Syria into the spotlight as the human face of an increasingly dehumanised crisis. Since moving to Germany, Nujeen has continued to tell her remarkable story and to capture the hearts of all who hear her speak.

Yasmine Sherif is the Director of Education Cannot Wait (ECW) – a global fund for education in emergencies and protracted crisis established by the World Humanitarian Summit. A lawyer specialized in International Humanitarian Law and Human Rights Law (LL.M), she has 30 years of experience with the United Nations (UNHCR, UNDP, OCHA) and international NGOs, starting her international career in 1988. Ms. Sherif has served in some of the most crisis affected countries and regions on the globe, including Afghanistan, Bosnia & Herzegovina, Montenegro, Cambodia, the Democratic Republic of the Congo, Sudan, and across the Middle East, including Jordan (the Syria-crisis) and the occupied Palestinian territory, as well as in New York and Geneva. Her expertise spans across the humanitarian, development, human rights, gender and peacekeeping spectrum.

Justin van Fleet is the President of the global children’s charity Theirworld and Executive Director of the Global Business Coalition for Education. He previously served as the Director of the International Commission on Financing Global Education Opportunity and Chief of Staff to the United Nations Special Envoy for Global Education, Former UK Prime Minister Gordon Brown where the landmark “Learning Generation” report put forward a pathway to finance and deliver the ambitions of Sustainable Development Goal 4 – inclusive and equitable quality education for all. He has been a passionate advocate for financing education, playing an instrumental role in the establishment of the Education Cannot Wait Fund for education in emergencies and the new International Finance Facility for Education.

March 1, 2021
As the COVID-19 pandemic continues, we have taken the decision to move the 2021 UKFIET Conference online.    To accommodate